I tried to resist this little Wichtel girl for quite a while and was in fact paying off for a different Wichtel doll and was all ready to pay for her when I looked once again at this girl and decided , I still really loved her and so asked if I could transfer by  choice over and pay the extra.

She is painted by Rosemary Muller. 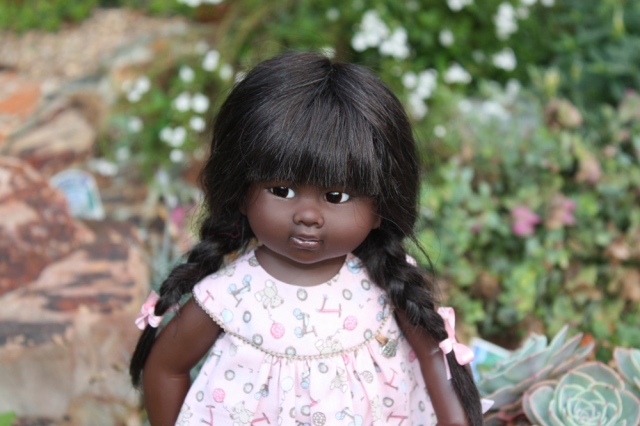 and I just love everything about her. She’s called Venia but I may change her name

I’m just waiting to see if she fancies a new name. Sometimes a doll will tell you their name before they are even over the doorstep ! and another time they’ll just watch and wait to see if they like what you decide on.

Since she’s arrived with winter coming I’ll have to see about getting her something warm to wear!

there was a doll lover who saw a doll and thought, why she is beautiful I would like one for my own! So she searched about and saw that you could place an order with one of the artists who painted the dolls faces and chose what wig she wore and what colour her eyes could be.

Finally she settled on an Artist whose list was ten months long! So despite the wait ,she added her name and paid her deposit. Then after studying the artists photos settled on having a brown eyed blonde, with a view to getting another , maybe a brunette with blue eyes later.

So time passed by and the doll lover waited , I cannot say she just waited for this doll, for she was busy going here and there and adding and sometimes subtracting dolls from her collection.

And so it was that over a year had gone by before she realised , her doll had not arrived! She contacted the artist and was told that the list was taking longer than expected but it would be her time soon.

Accepting that these things can happen , she willingly waited and carried on with her other doll collecting. She even bought one of the dolls, she was waiting for, but by another artist but it just sat in it’s box until she had her adopted not wanting the poor thing to be neglected and so she waited until two whole years had passed !

It had been so long , did she still want this doll? Even an elephant would have given birth by now! So once again she contacted the artist, who was hard to get hold of, and once again she was told her doll was nearly to the top!

Determined to not give in, she waited and waited and waited, she saw others show their dolls from the artist and finally her friend received hers! At last, her name had been added five days after her friend, so she’d be getting an email any day!

And she waited and waited until finally she asked and was again told you are nearly at the top of list. This time she only left it a couple of weeks before she asked again and yet it still took another three months of asking for her to receive the news, she is ready!

Would she still be wanted? had the doll lover moved on in her tastes? would she be left in her box in just her underwear like the last?

No she was not left in her box , for once fate decided to help this little darling and an email was received from a well known doll site , telling of dresses to fit our Little darling and so a dress was ordered and boots kept from last girl used and so she in OUT!

Her sweet face, a picture of innocent wonder at finally seeing the world about her.

Luckily the doll lover, loves small dolls and so she is welcome and gets to go into the open and breath in the fresh autumn air.

The doll lovers not convinced this was the wig she chose or the colour but she’s not going to argue.

So it is her box as been put away and she’s joined her new big brothers and sisters on their shelf and is being made welcome and she’s even found her name….. Shelby.